Unlike other high-end jewelry lines sharing parallel appeal, Nightrider chooses to reflect upon the history of the human struggle for independence.

In an admirable celebration of the valiant and victorious men and women of America, designer George Ganem has fashioned an exclusive collection of limited edition and one-off pieces that exude a traditional American way of looking at life, woven into the concepts of freedom.

An outgrowth of a band of riding brothers, Ganem acknowledges,”Independence, self-reliance and freedom are central to the motorcycling spirit,” and to the voice of Everyman, “the cry of all human beings to be free.”

There are Maltese crosses, Celtic knots, multi-dimensional stars and other icons popular with motorcyclists, military and rock music personalities. Representations of cultural revolutions mix with symbols and images from the French Resistance, as well as 14th and 15th century Spain.

We acknowledge Nightrider Jewelry, not for symbols or stones, but rather for the unique achievement in this particular design category-for a thematic excellence steeped in history that continues to reinvent itself, and for the powerful expression of the artistic feeling of the motorcycling culture. 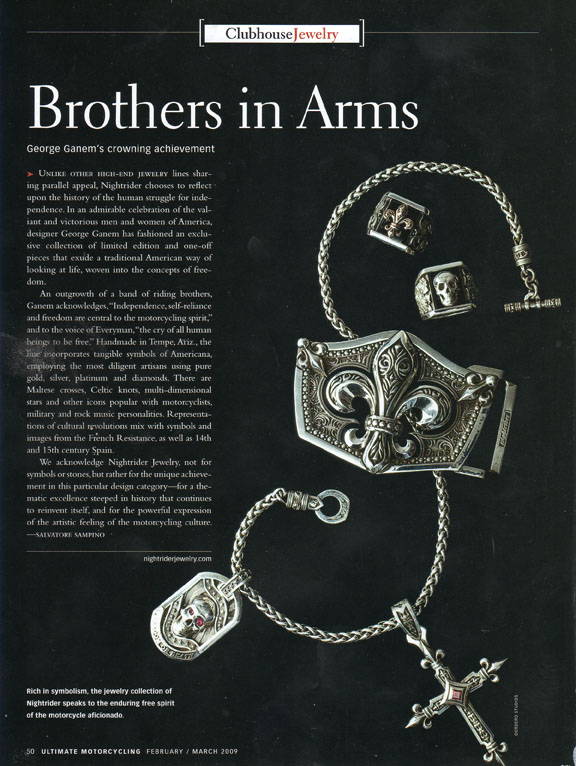 NightRider's Holiday Gift Guide 2020 tips: 1) Get your shopping done early 2) Give them a gift that stands out from the crowd This year has been a doozy. And that means it's more im …

Ocelotl [oh-say-lo]:“Jaguar Warrior” in the Aztec language of Nahuatl. It can be said that all warriors have the heart of a jaguar. And among all t …

(boo-shee-doe) Japanese: “The Way of Warrior.” The code of honor and morals developed by the Japanese samurai warriors. Every warrior has his code. …