NightRider Jewelry soon will be making its unique pieces in a larger 15,000-square-foot manufacturing facility in Chandler to help meet demand for its products. The company will move to the Chandler facility from its 1,200-square-foot space in Tempe, a former Ganem Jewelers location on Rural Road at U.S. 60. Company officials declined to share the cost of the new facility, but said the expansion is expected to create 50 jobs. NightRider pieces are not your average jewelry. They generally target men, featuring hard edges and symbols such as crosses and skulls.

“It started with the biker crowd,” said co-founder and head designer Nick Ballantyne. “Bikers like to wear jewelry, and we took that approach and understanding to offer a premium product.” All NightRider jewelry is made locally and priced from $300 to $8,000. The pieces are available through the company’s website, two Ganem Jeweler locations, and the NightRider retail store at Scottsdale Fashion Square.

According to Unity Marketing, a market research firm that provides companies with information on affluent customers, the overall jewelry market generated $55 billion in sales in 2010. Between 2008 and 2010, two-thirds of the industry’s growth came from men’s jewelry. NightRider co-founder, jewelry expert and artisan George Ganem said he got the idea long ago to launch a jewelry line focused on the American lifestyle of freedom and individualism.

“Freedom-oriented, free spirit, an American icon type of concept of freedom,” he said. “Bikers epitomize that. It’s jewelry that is edgy jewelry, that represents freedom, being able to travel, being able to meet people, just a great spirit of entrepreneurial attitude (and the) ‘anything’s possible’ system here in America.” All of NightRider’s pieces are manufactured in the Phoenix area, something Ganem considers a competitive edge. “We compete in quality and design,” he said. “Our pieces are made at a level that most people can’t even comprehend.”

Ballantyne and his brother, Thad, never imagined they would make a living by designing and selling jewelry. In truth, they kind of stumbled into the whole thing. “I married George Ganem’s daughter and was going to art school,” said Nick Ballantyne. “He randomly asked me to sketch some pieces, so I did, and everybody kind of liked them.” Soon thereafter, he quit school and proceeded to learn everything he could about jewelry design. His older brother, Thad, was recruited to help in the new venture. In 2006, they launched NightRider Jewelry with Ganem.

Even before the new manufacturing building opens, the Ballantynes said they’re projecting 80 percent growth from 2011 to 2012 because of high demand. They declined to share revenue numbers, but said they have been averaging 30 to 40 percent growth in the past three years, having gone from selling about 1,000 pieces during their first year of operation to between 8,000 and 10,000 this year. One of the biggest reasons for the growth, particularly this past year, the Ballantynes said, is NightRider’s retail location at Scottsdale Fashion Square.

The new production facility will give NightRider the ability to produce 10 times more product and accommodate up to 10 retail stores. Plans already are under way for the next store, with Las Vegas eyed as the location. Down the road, the Ballantynes said, they want to open NightRider stores on the East Coast and in their hometown of Nashville, Tenn.
Though they have big plans for the brand, being everywhere is not one of them. “The goal’s not to be in every mall across the country,” Thad Ballantyne said. “We want people to have an experience.” 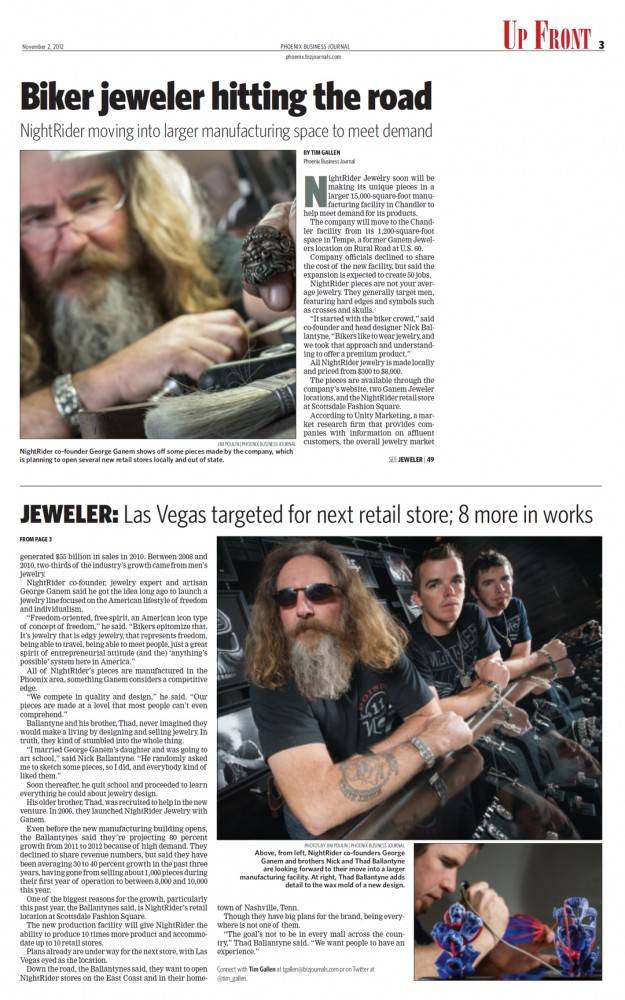