CHANDLER, Ariz. - Jan. 28, 2019 - PRLog -- NightRider Jewelry, a Phoenix-area based and American-crafted luxury jewelry brand, has been both surprised and ostensibly flattered to see their work prominently featured on the first season of the hit FOX TV show Masked Singer.

Fans of NightRider Jewelry have not missed the obvious similarities between The Lion costume featured on the show and the popular Royal Blood Lion, the signature ring created by artist Nick Ballantyne and added to the NightRider Jewelry Jawbone Collection in 2014. The show's elaborate lion costume features a glittering mask that recreates many of the ring's details from the gleaming gold, to the distinctive sweeps of the lion's mane, the facial expression, and the pattern of the gemstone settings.

The discovery that Marina Toybina, the Emmy award-winning costume designer for Fox Television's Masked Singer (and a former Phoenix resident), had paid homage to their work on the hit show initially ruffled the Chandler, Arizona based jewelry company. However, after having seen their Royal Blood Lion design in a larger-than-life format on the small screen…they believe both fans of the show and loyal NightRider customers can agree on one thing: the source material for the lion mask does in fact rock.

Artist and NightRider Jewelry co-founder Nick Ballantyne, upon seeing images of both Toybina's concept sketch and the resulting lion costume, quipped "The real question here is, who is that masked singer?

NightRider Jewelry was founded in 2006 with the idea that jewelry could do better. Be made in America. Created by hand. Brought to life by true artisans. Designed with passion, attention to detail, and pride so that every piece is imbued with true meaning and given a soul. With three retail locations in Scottsdale, AZ., Denver, CO., and Honolulu, HI., in addition to the online store, the company is proving that true American handcrafting is alive and well. For more information, please visit: www.nightriderjewelry.com 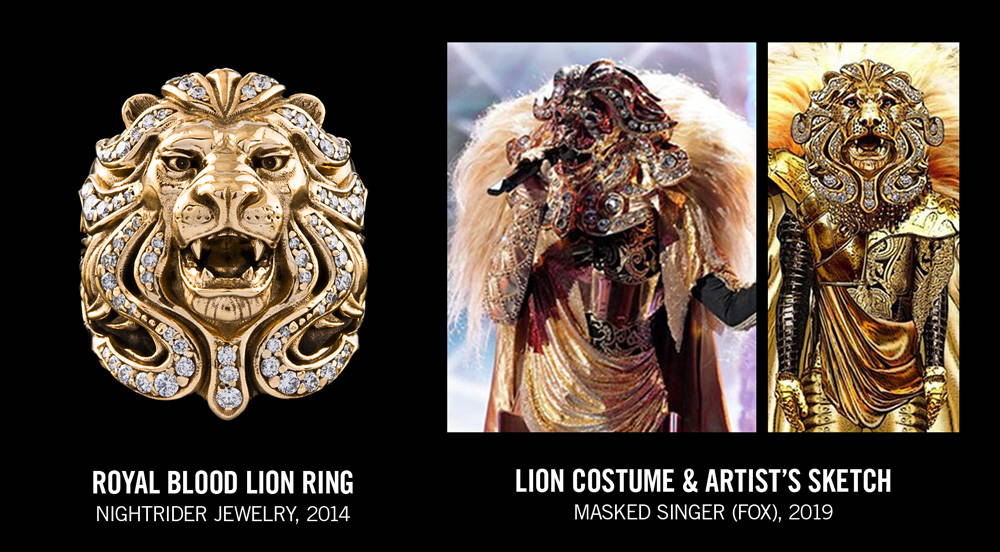